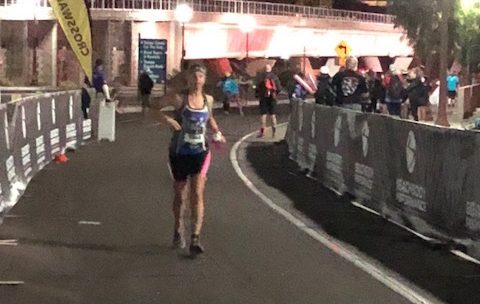 What Was I Thinking?

I signed up for my first Ironman ever this past year. Then had to figure out how in the world I’d get to the finish.

No way would I be able to actually run during the race, between a nasty disc or two in my back, and some hip issues. But with only 17 hours to cross the finish line (minus a 90 minute swim and a 7 hour bike), I couldn’t simply walk, either.

So I dug back into a method I’ve used before as a bridge back from injury: the run-walk method developed by Olympian and running guru Jeff Galloway in 1973. Originally developed to help the beginner runners, the run-walk gives short walk breaks during a run. There is a formula for the number of minutes for running versus walking in Jeff Galloway’s methods. There are also charts that help you know what combination of run-walk to do to finish a race in such-and-such time.

To be honest, I kind of made my own plan up based on what my body tolerated during training. But the bottom line is, I keep going back to this method because it reduces muscle exhaustion and helps reduce my risks of re-injury. All good things.

I was in good company.

Until the weeks right before Ironman Arizona 2017, I was embarrassed about my plan to walk part of the run. I saw it as some indicator that I’m not good enough. Not an athlete. That all changed in the last weeks leading up to the race. I found out through the Ironman Arizona Facebook page that LOTS of athletes were planning to do a run-walk during the race!

Famous People that WALK during their runs!

Let’s start with the most obvious– Jeff Galloway. THE quintessential developer/proponent of the Run-Walk concept. He also happens to be an Olympian- not too shabby. So if you choose this method, you’re in pretty good company! He has a training website and numerous books on the technique. Recently, my own daughter (OK- not famous, but hey, she’s my daughter!) used one of Jeff Galloway’s books to complete her first half-marathon, despite a history of nagging shin splints. Meghan Kita, a 17-time marathoner and editor of Runners World Magazine also gave it a try, finishing a half-marathon in 1:43-ish.

And let’s not forget that Race Walking is an official Olympic event. Yes- I KNOW it isn’t the same thing. Race walking officially has lots of rules and stuff that wouldn’t apply to the Run-Walk method. But I feel like if Olympian Maria Michta-Coffey can finish a mile in 7:18 race walking, or Tom Bosworth can set a world record race walk 5:31-ish/mile, I have nothing to be ashamed about by walking during my run.

So, What Exactly Did I Do During Ironman?

My farthest training distance for the marathon was about 13 miles. Yep- that’s it. Between my bike crash, long recovery, and life in the months before the race, 13 miles was the farthest I hade gone. ALL of my Ironman training for the run was done with a walk-jog (affectingly called wogging in our home, now). Generally, I’d jog for ~2-3 minutes, then walked for ~1-2 minutes, depending on how I felt. The jogs were short, quick steps, at about 170-180 beats per minute.

To learn this, my therapist had me jog with a metronome until I had the beat fixed in my head. These short quick strides kept me low to the ground, reducing the usual pounding from running. Giving my back and hips a break. My walk stride was also quick short steps. NOT a broad reach, because it would aggravate my hamstring. Not so fast that my hips were rocking. I felt so much better when I’d be done with a wog than my old runs. Don’t get me wrong! The 13 mile training wogs were exhausting by the end. You’re not just plodding along on the walk portion. But my body recovered so much faster and I didn’t have the aching, painful jarring of runs. My knees wouldn’t throb. My back disk stayed calm.

During the actual Ironman race, I waited until I came back from the 112-mile bike ride to assess how my legs felt. The wind on the bike ride had emptied my legs pretty good. I also knew I had double the distance of any of my training wogs still ahead of me. I decided to flip my usual recipe and start with a 3 minute walk, 1-2 minute jog, and see how I felt after the first 5 miles or so. It turned out to be a pace I could keep just under 15 minute miles without worrying about finishing the run. How’d I pick those numbers? Honestly, I grabbed them out of the air in a moment of need. Coming out of the transition form the bike, I just told myself, get out there and start something. See what happens.

Keep in mind, speed was not my goal. I just wanted to finish before the 17 hour deadline. I recalculated along the race-course to assure myself I was on track, knowing I would likely slow down toward the end. Somewhere around mile 20, my body did start to tire out, and my miles started clocking in around 17 minutes. The key was to not stop, not give up, and NOT change my 3 minute-1-2 minute pattern. Not shrug off a run section.

I passed a lot of people at Ironman using my walk-jog.

During my walk segments, many runners jogged past me, only to get passed by me when they burned out to a slow walk. By mile 16-18, I was clearly re-passing them over and over. A couple of them started letting me know how many times they remember me passing them, and were impressed by the pace I was keeping at the walk. Compared to their tired walk, my quick foot turnover had had me going at a pretty good pace.

I am in no way an expert in this run-walk method. I am just always looking for a way around the “no’s” in my life. Like, ‘no, you can’t do Ironman because of your injuries.” My first response to something like that is, “oh, yeah? Watch me!”

I am a firm believer that adding walking of some kind into your runs ( or in my case jogs), can really help people finish big goals, such as half or full marathon and even Ironman. I love that wogging allowed me to finish one of the biggest goals in my life and not end up injured.

If you want to learn more about folks that have tried run-walking, I would suggest this article from Runners World: https://www.runnersworld.com/racing/this-17-time-marathoner-tried-run-walking-a-race-heres-what-happened . If that inspires you to want to learn more, check out Jeff Galloway’s website at http://www.jeffgalloway.com .

For more tips on training for an Ironman, see my other posts here.